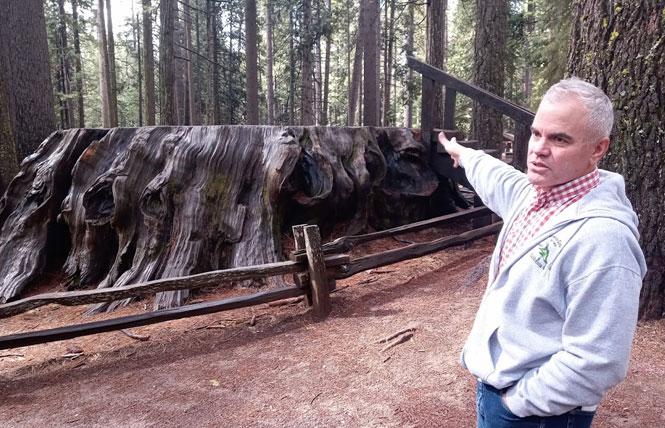 Calaveras County, in the foothills of the Sierra Nevada, takes its name from the Spanish word for skulls. Early Spanish explorers reported seeing Native American skulls along what is now called the Calaveras River. But it was gold, not skulls, that would put the region on the map. The area’s population exploded after the 1849 California Gold Rush.

One of Calaveras County’s biggest cash cows today is tourism, which has been kept afloat during the COVID pandemic, primarily by Bay Area residents seeking a remote getaway from easy driving. About a 2.5 hour drive from San Francisco, Calaveras County fits the bill. The Calaveras County Visitors Bureau estimates that about one million tourists a year visit the county, which has a population of just 45,000. This translates into support for jobs that employ 2,400 people and nearly $6 million in state and local taxes.

The county, like much of rural California, has long had a live and let live attitude toward LGBTQ rights. It may also soon elect its first openly gay member of the supervisory board. Martin Huberty is running for the seat of District 3, considered the most liberal district in the otherwise dark red county. The election is June 7.

“There’s a strong lesbian community here,” Huberty said. “I wish it was the same with gay people.”

The Alliance is planning a Pride in the Park day at Murphys on September 3 this year. The Alliance is also hosting the #Out4MentalHealth Tri-County Picnic and Skill Share event on June 19 in Sutter Creek. Also upcoming is the Safe Space Art Show celebrating “rural queer identity and artists” which includes all three three counties. The art is scheduled for May 23 for the May 29 opening and reception at Rosebud’s Cafe in Jackson.

The city of Murphys is a magnet for tourists. It is home to art galleries, theaters, eclectic boutiques, restaurants, wine tastings, and boutique hotels and bed and breakfasts. Boyle MacDonald Wines on Main Street includes live music Fridays. Among the most popular performers you may see there and at other Murphys venues is lesbian singer Jill Warren. She has performed nationwide and worked as a guitarist on the Las Vegas mega-show “Peepshow” as well as the “Grease” and “Cats” touring companies. She now calls Murphys home.

the Murphy’s Historic Hotel in the heart of downtown offers fine dining and a separate lounge with casual bar food. It has been in operation since 1856 and former President Ulysses S. Grant, banker JP Morgan and writer Mark Twain are among those who have stayed there.

Be sure to check out the Red Apple, an apple stand about 10 minutes north of Murphys along Highway 4. It’s on the way to Big Trees Park. It is famous for its freshly baked donuts and apple pie and, of course, its freshly picked apples.

Ironstone Vineyards in Murphys offers wine tastings and great food at Gold Leaf Bistro. The bucolic vineyard grounds include a large amphitheater concert space that attracts big-name musicians. The restaurant takes its name from the world’s largest crystalline gold coin which is displayed in a vault in the vineyard gift shop and museum. It was unearthed in nearby Jamestown in 1992. Ironstone founder John Kautz bought the piece two years later for an undisclosed sum, but it was appraised at the time for 3.5 million of dollars.

If you’ve had your fill of wine tastings, Hinterhaus distillation at Arnold offers vodka, gin, whiskey and liqueur tastings. Husband and wife team Nate and Bonnie Randall land owners opened in 2020. Arnold is 4,000 feet above sea level. low heat boil and some say this results in better flavors.

Calaveras County could be renamed Cavernous County, with three huge caves open for viewing. Mercer’s Caverns was discovered by Walter Mercer in 1885 and has been a tourist attraction ever since. The first tourists had to push the cave away with ropes and candles. Mercer Caverns is about a mile north of Murphys. Moaning Caverns Adventure Park is about a 15 minute drive south of Mercer Caverns and is home to the largest cave chamber in California. A 10-story spiral staircase leads to the cave floor. The other cave California Cavern State Historic Site, is a bit out of the way, about 40 minutes from Murphys, but if you can get there, you’ll be treated to the longest cave system in the state. It is also California’s first “showcase cave”, opened to tourists in 1850. 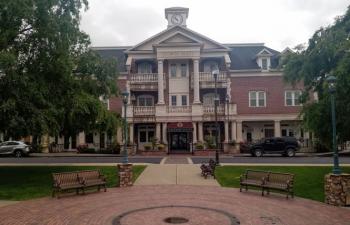 The Gateway Hotel in Copperopolis reminds some of the courthouse from the movie “Back to the Future.” Photo: Ed Walsh

Cuperopolis is a city that is difficult to pronounce but easy to visit. It’s just off Highway 4. The town dates back to 1860 and got its name from copper mining. While most of the old city was destroyed by fires, a whole new Copperopolis came into being around 16 years ago. It is designed to look like an old gold rush town. The centerpiece of Copperopolis is the high end Gateway Hotel. Many said it looked like the courthouse from the movie “Back to the Future.” A picturesque square with quaint shops and restaurants surrounds it. The Gateway’s sister property, Copper Valley Golf Club, offers two-bedroom bungalows and the property’s restaurant, Vine18, is known for its fine cuisine; the Vine18 bar draws a crowd for its happy hour from 2 to 5 p.m. Monday to Friday.

Twain is believed to have written the short story “The Famous Jumping Frog of Calaveras County” while in Copperopolis, but the story concerns the frog-jumping contest at the nearby Angel Camp. the Calaveras County Fair and Jubilee of the Jumping Frog takes place the third weekend in May (19-22 this year) at Angels Camp and brings Calaveras County to the world’s attention each year.

You’ll need a car to get to Calaveras County, but once you’re there, a good way to go if you’re wine tasting is to take an organized tour from the Gold Rush Tour Company. The company combines wine tasting with a guided walk of Murphys, and another of their tours combines wine tastings with visits inside wine cellars that stay cool on even the hottest summer day. .

Help keep the Bay Area Reporter going during these trying times. To support local, independent and LGBTQ journalism, consider become a member of the BAR.

By Victor Block My wife, Fyllis, and I fell madly in love at first sight with the house that was{...}

1/5 Space Perspective on Tuesday unveiled its Spaceship Neptune, a luxurious crew capsule designed to take travelers to the stratosphere{...}