COUNCILORS have rejected a planning application to convert a former bed and breakfast in Llandudno into a council-run studio for the homeless.

The application to convert the Mayfair at 11 Deganwy Avenue into a multiple occupancy (HMO) home was rejected after councilors feared it would lead to the decline of the town’s tourist industry.

Earlier this week it was reported that the council had received dozens of letters from hoteliers complaining of anti-social behaviour, drug use and constant police visits which were destroying the area.

The application submitted by the applicant Manhattan Rentals was recommended for approval to grant temporary approval for a change before councilors vote against the proposals.

The decision follows criticism from Conwy for allowing the HMO to continue, despite the license expiring on July 5.

The Mayfair has been used as temporary accommodation under emergency legislation, passed during the COVID pandemic.

The request was for a two-year extension to operate as an HMO.

Berin Jones is the chairman of the Llandudno Hospitality Association and spoke out at the meeting against the proposals, arguing that Deganwy Avenue was protected as part of the holiday accommodation zone.

“Housing cannot have it both ways by recommending approval,” he said.

“Llandudno is a thriving tourist destination with a range of accommodation for visitors, and the guest houses that operate on Deganwy Avenue are well run and profitable. Don’t take this for granted.

“If we remove service housing in the city, two things will happen: visitors will find nowhere to stay and will remain just day-trippers, which will bring in less revenue for the county, or they will go on self-catering, which will increase the demand for housing, which could be inhabited by local residents, further exacerbating the local housing crisis.

“We recognize that the housing crisis has been caused by the changes in landlord/tenant legislation, and this has led to the authority losing housing to house people, but as an authority you have put in place specific policies to protect the county’s fragile economy which is worth £900m and 11,000 jobs.

He added: “Remember Rhyl and Colwyn Bay. Once holiday ownership was turned into multiple occupancy for local authority tenants, the whole resort declined, as did the local economy.

But speaking on behalf of the claimant of the claim, Richard Lukjaiec listed other properties on the street which he said were now residential properties.

He said: ‘You can see it’s a mixed bag along Deganwy Avenue so residential type accommodation wouldn’t be unusual, and B&Bs are particularly helpful in their model that they can be easily converted.

“I’ve met some of the people who are in the accommodation, and it’s an emotional one. This property is managed by CCBC, and how it is managed is a separate emotional matter. That aside, housing is a problem, especially for (those) on low incomes. If not here, where?”

But several councilors spoke out against the proposals

Cllr Mandy Hawkins said the B&B went against the council’s own local development plan and was not fit for purpose, adding: ‘We are depriving people of their human rights and their dignity.

“Tourism in Conwy County and Llandudno is worth millions. The app does not support our local businesses; in fact, it goes against Destination Conwy. This sends the wrong message to guests staying at nearby properties. If the owner can’t run it as a hotel, he has to sell it to someone who can.

“The property is not fit for purpose. It’s not appropriate. It makes people’s lives a misery. We must respect and improve Llandudno. We need to support these vulnerable people in the right way.

Cllr Jo Nuttall said: ‘In our own PDL (Local Development Plan) it says there is a need to protect our tourism sector, particularly in resorts.

Cllr Nigel Smith said: ‘This is very concerning for someone who was born and raised in Rhyl, and I have seen detrimental changes to communities when hotels have all been turned into multi-occupancy homes. It’s very interesting that public protection, which I think could be one of our own departments, has highlighted the issues and the fact that some of the rooms may not even be the right size .

Cllr Mandy Hawkins moved that the request be denied. Cllr Dave Jones seconded the proposal and the vote was unanimous.

What hoteliers and locals had to say:

“Moving to an HMO would make this permanent. There have been many negative effects on the immediate neighbours, including myself, in terms of disturbance, noise and anti-social behaviour, which guests have commented on.

“It’s easily noticeable from a distance and certainly not what visitors want to inhale when sitting and relaxing in the fresh air.”

She wrote that one of her guests had witnessed someone being arrested while she was extolling the virtues of Llandudno.

Ms Legg explained: ‘When we came out there were two police cars outside the Mayfair (a common occurrence) and then to my horror an occupant was led away by the police in handcuffs!

“My guests were elderly and were mortified to witness this, and they actually said they thought Llandudno was a safe place.” She added: I’m appalled that the council is willing to sacrifice small businesses like mine after spending over £50,000 to make it something I’m proud of, even though the council isn’t. Comment this story Comment Sophie Fullerton is a New York-based political scientist and human rights researcher. Last November, around the{...} 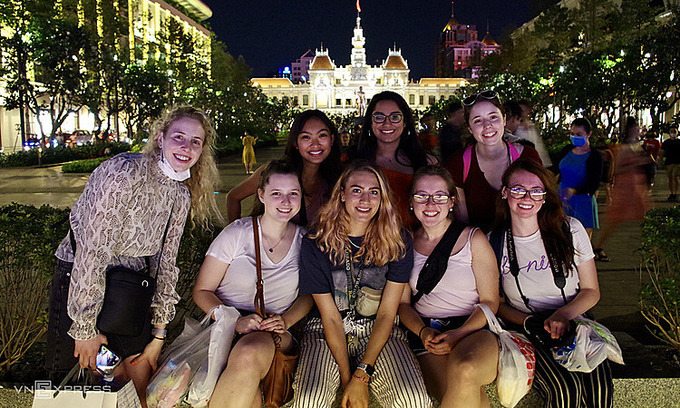 Pham Ha, CEO of luxury cruise group Lux, said he was “disheartened” and “disappointed” because a final decision on visa{...}

By Benjamin Lyngdoh Tourism is a vast economic sector. It includes a number of businesses and services that are dependent{...}